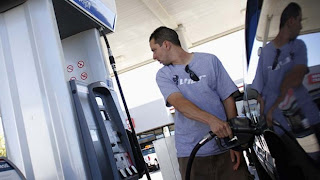 On the drive back from Beaufort this Friday I stopped for gas just in time to witness a real live ethical dilemma, right there in the gas station.  It made me wonder if knowing how to "beat the system" frees you from the responsibility to "play fair."  It all happened so quickly that it made me think that there must be many, many instances of rare knowledge (you know the kind of knowledge that makes you feel a bit smug) that leaves the less informed at a disadvantage.  Is ignorance justification for exploitation?


As I was unbuckling my seat belt I looked up at the pump ahead of me.  After the tank was filled and the pump turned off the person lifted the gas hose as high as they could and squeezed the handle one more time.  In the old days several more ounces of gas would pour out.  Today with advanced vapor lock systems and electronic shut-off values only a few drops come out (at most a teaspoonful according to online reports), but it is the thought that counts.


Yes, I have heard people say that raising the hose prevents a few drops of gas from splattering your pants or your shoes.  I do not believe that was what my neighbor was worried about.  And yes, I have heard that dripping gasoline on the ground pollutes the air and seeps into our waterways.  The vigor with which the hose was raised and the nozzle shaken was more than what would have been needed if that was the worry.  Besides, if you raise the handle appropriately after removing it from the tank there are no drips.


No, the idea here is to get the last drop and consequentially to leave whoever comes next to the pump with an empty hose.  I have heard old-timers talk about going to gas stations after they had closed and draining all the hoses and getting enough gas to drive home.  You could do that in the old days because A) filling stations closed a night, and B) their pumps lacked modern shut-off values.  Those stories are always told with a bit of a chuckle and I think we all know why.


So what kind of community do you want to live in?  I like smart people.  I like rare knowledge, but I love the idea of not taking advantage of people even when you know you have an advantage to take.


How many other instances of untaken advantages can you think of?  Or maybe I should ask, how many untaken advantages did score today?  That thought occupied me for the entire drive back to Charleston.  The advantages not taken are a measure of how community-minded your day has been.
Posted by George Stevens No comments: