He’s in his 40’s, he’s pulling in a healthy executive-level salary, and he said he’s lived in the Lowcountry all his life. He had never heard of the Community Foundation until ten minutes ago when we were introduced, and he said for him, no – charitable giving is not high on his priority list. “I pay taxes for programs that provide the same services charities provide, and anyhow, poor people have enough given to them without me chipping in to add to all the resources available to them.” I asked him where he lives, where he went to school, and what he does in his off-time. And just as I suspected, it turns out he’s benefited throughout his life as much as anyone in the Lowcountry from the services provided by non-profit organizations. And I told him so . . .

Most of us who are privileged may think we “pay our own way”, but I bet all of us benefit from the nonprofit sector more than we ever stop to think. He went to public K-12 schools where half the faculty had received small grants for classroom projects, including the field trips he went on. Yes, he went to college with help from a scholarship, “but that’s not charitable,” he said, “because I deserved it.” He’s a regular at the theatre and at concerts, but no one ever told him that charitable donors subsidize him by paying the performance cost that’s not covered by his ticket price. And when he drives down tree-canopied roads to his home near a salt marsh, it never occurred to him that those vistas are there thanks in large part to the work of environmental non-profits. Oh yes, and he adores his dog, Webster, adopted two years ago from a local (non-profit) animal shelter, neutered and micro-chipped with someone else’s donated dollars.
Posted by Richard Hendry 1 comment: 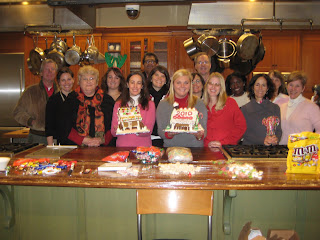 From our Foundation Family to yours,
Happy Holidays !

Recently, I traveled to Allendale County to conduct site visits for the Winthrop Family Allendale/ Hampton Fund in memory of Sarah T. Winthrop. This grant program serves nonprofits in Allendale and Hampton Counties and was established at the Foundation in 2002. Because the family members are scattered throughout the United States and they participate in the grantmaking process remotely, they depend on the Foundation Staff to be their eyes and ears on the ground in order to make informed decisions.
Allendale County is located about 2 hours away from Charleston and most other metropolitan areas. If you don’t know anything about Allendale, you can look for it among counties that have the highest statistics for negative indicators and the lowest statistics for positive indicators. On a recent visit to Allendale to learn more about the Allendale Campaign to Prevent Teen Pregnancy based at Allendale-Fairfax High School, I learned that last year 20% of the girls attending that school became pregnant. At Allendale County ALIVE, a local community development corporation, I learned that over 100 families are on a waiting list to receive critical home repairs. At the Healthy Learners Program, facilitated by the Sisters of Charity Development Corporation, I learned that a large number of children are unable to access health care because of transportation barriers, lack of insurance, and in some cases their parents lack the skills and resources needed to seek appropriate care.

Despite odds that seem insurmountable and low rankings across the board, there are several nonprofits with some of the most dedicated staff that I have come in contact. These individuals are working tirelessly to provide much-needed services and to create positive change in Allendale County.

Form more information about Allendale nonprofits, please contact me at Tasha@CoastalCommunityFoundation.org or 843-723-3635.

Posted by Tasha Tucker No comments: