The Stories We Tell -- Dinnertime Speech at Annual Celebration 2010 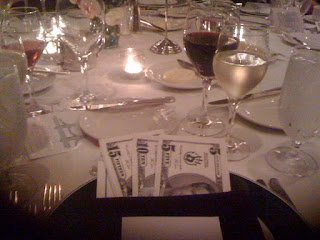 What an inspiration to hear from our first President, Ruth Heffron and our second President, Madeleine McGee tonight. Their deep connections into the community, hard work, and inspired leadership helped to create the extended family you see gathered around you in this room tonight.

In our extended family I see Howard Edwards, one of the founders of Coastal Community Foundation, and our first Chairman. I see Barbara and Conrad Zimmerman, both bigger than life, and both signers of the first Haven Award. I have a copy of the first Haven Award plaque with me tonight. Down in the right hand corner, I see Ruth’s signature…and off to the side, where it doesn’t take up too much space, where it won’t get in the way, is the unmistakable mark of Richard Hendry. That signature was made 27 years ago.

As I look out across this room I see many old friends. How many of you knew Mal Haven? If I told you he was of sweet disposition and a true saint, would you believe me? Would you have any other choice but to believe me since we have named an award in his honor?

A startling thought is that 27 years from now, when we are holding a Haven Award event like this one, no one in the room will have a personal memory of Mal Haven. They will have heard of him, because of this award, but none will know him.

I am sorry that these are depressing thoughts, but tonight we are here to both expand Mal Haven’s noösphere and to identify a new member into that sphere of influence. Those are decidedly not depressing but rather celebratory events.

Because of the concept of the noösphere I now believe in the afterlife. I believe that we create our own afterlife in the stories we tell about ourselves and how people repeat those stories and other stories about us to others. We know about Mal because he was part of our family. This framed invitation that became the first Haven Award might have just as well have been discarded had Virginia, Mal’s widow not returned it to us. It is now a family heirloom.

Tonight we treated you as family, from the food on the table, to the encouragement to tell stories about how you became interested in a life of charity. Those stories become guiding lights. When we ask, what would my father have done in this situation? What would people think of me if I did that? While my father told me that the only thing of value that one really has is his name, he did not mean “George Stevens” or “Mal Haven” he meant the name we make for ourselves in the community. That name is sculpted by whose dinner table stories ring in our heads when we face a difficult decision. Which people we seek to follow. Who we compare ourselves to…who we aspire to be.

I never knew my great uncle. I do know from the stories my mother told me that during her lunch hour, in high school, my mother used to run home and dance with my great uncle. My grandmother made them roll up the rugs so they would not be worn thin by their dancing, but that is another story. Those rugs looked brand new all the way up to the day of my grandmother’s death.

Anyway, I aspired to be the kind of man who would teach a high school-aged niece the Lindy Hop, Two-Step, or Swing over their lunch hour. That is all I know about him but I aspire to be like him. That story, that idea, has shaped my life. You might say this is a trivial example, but it is these little stories that accumulate to make the man.

Tonight we will be honoring another Haven Award winner. The stories we tell of him will “make the man.”

I am going to ask Dr. Stephen McLeod-Bryant to return to the podium to make the award.

[award given to Tom Baker]

Coastal Community Foundation is, by its very name, Coastal. Our name is important to us, not the three words, Coastal Community Foundation, but for the power of the stories we tell about ourselves and about YOU. I look across the room and I see Harriet and Linda Ripinsky, partners in a venture philanthropy group that is changing how charitable giving is done in Charleston. I see Bill Hewitt who is creating Promise Neighborhood, a public/private partnership with the schools. I see John Luther, leader behind Focus Partners, which is trying to change the quality of teaching in our district. I see Mickey Bakst, and the Charleston Place organization that has donated the food and drink we are enjoying tonight. Mickey Bakst has used the platform of Charleston Grill to promote the nonprofit sector. I tell these stories, about YOU, over and over again as a way to inspire, guide, and create change as you have done through Coastal Community Foundation.

As part of our coastal strategy we have opened an office in Beaufort County, Edna Crews is our first Regional Director. She is a natural story-teller and for a reason. She tells our family stories to inspire others to join with us in thought, word, and deed. In communities that do not know us well we tell your stories to all who will listen.

I would like to ask all of the Staff of Coastal Community Foundation to stand. There is Angel, Tasha, Courtenay, Christine, Margaret, Ashley…and of course Richard Hendry.

Your stories have become our stories, our family heirlooms.

(These were the notes for a speech given on May 8th by George Stevens, President, Coastal Community Foundation. The actual speech deviated slightly from these notes.)
Posted by George Stevens