The Beaufort Fund, which makes grants in Beaufort, Hampton, Jasper, and Colleton Counties, gave out checks last week to 57 nonprofit organizations for a total of $500,000. If you think that is the miracle I am writing about you need to think again. It's not the money, it's how the miracle-workers of the nonprofits of those four Counties looked out for each other while minding their own mission.

Applicants to the Beaufort Fund can request up to $15,000 in funding. Many don't. Many realize that money is hard to come by and they actively "leave money on the table" so their neighbor nonprofits can get some. Hard to imagine, but that's where the miracle comes in.

Every applicant to the Beaufort fund writes a proposal for funding that includes a dollar amount. That funding request is based on what the organization intends to do with the grant. We always ask what the organization would do with less money should the Beaufort Fund be nearly exhausted before their turn comes. Nearly every nonprofit responds that they could get by with less and that while not ideal, less would be acceptable. When asked why they did not ask for more, many reply that they did not want to take away from other needs served by the Beaufort Fund.

In the Gospel according to John, Jesus fed 5,000 with seven loaves and two fishes. Some interpret this miracle as a result of Jesus creating more food. The attendees at the Beaufort Fund Award Ceremony believe a different type of miracle took place...one they saw with their own eyes.
Posted by George Stevens No comments:

On Valentine’s Day, I walked into a room at Seacoast Church to help host an event. Like a child, I was mesmerized by the beautiful cupcake display. As I playfully reached for one before our guests arrived – and had my hand slapped - we began preparations for the evening.

Healing Farm Ministries and Seacoast Church partnered to throw a party celebrating the lives of people with disabilities. More volunteers arrived and got to work setting up the decorations. Red tablecloths, beautiful roses, and real table settings – no paper here! As the guests arrived with their family members or kindhearted caregivers, they were greeted at the curb by a smiling volunteer directing them inside, where they were signed in for name tags by a host and again were welcomed as they entered the banquet hall. Each table had a volunteer present to ensure all needs were taken care of for the guests. Table hosts were also on hand to get the drinks as servers came around with a hot meal for everyone.

The band began to play, and a number of the 160 people present made their way to the dance floor. (No shy people at this event!) Through the night, conversation filled the room as the music continued and desserts made their way around. Before leaving, each attendee was given a fresh rose to take home as a memento of the evening. There were a lot of smiles on the way in, and there were even more on the way out. The event was a success and a great way to spend Valentine’s Day. 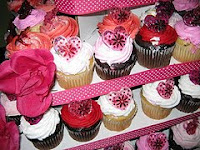 And yes, I did get my cupcake. I loved it, and I loved being there. 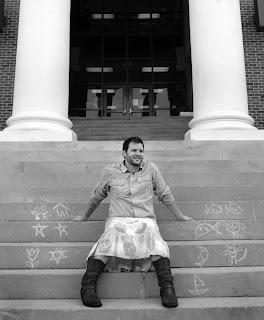 You know the phrase for not getting something done that should have been? In the case of co-directors John Caspian and Jana Hodge, the idea to establish SideWalk Chalk, born during an ordinary bookclub meeting, became real and is now changing young lives in some of Charleston County’s poorest schools. Forty or so committed volunteers visit schools weekly to mentor over 600 students and to help with creative writing projects. All activities are tied to state education standards and help children master language skills, but SideWalk Chalk goes beyond just that.

Participating volunteers believe that creativity and expression can inspire all children and better their lives in remarkable ways. Working in small groups, one-on-one, and investing in our youth (and future leaders), one can see the difference.

To support the meaningful work of SideWalk Chalk, get involved as a volunteer. Visit http://www.sidewalk.us/ for a website that’s hard to stop reading.
Posted by Christine No comments: