Why Not In Georgetown? 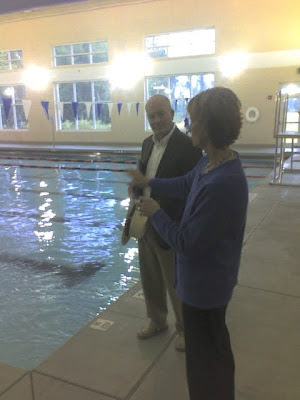 They said that white kids would never swim in the same pool with black kids. Then they said that nobody could raise $6 million in Georgetown County. Now they are saying that there will never be enough members in Georgetown to keep the facility open. Amy Brennan (pictured above with Charles Rowland of Walterboro) has heard "them" say these things before. She listens, but only half-listens, when she hears such talk. Given this flagrant disregard for the words of community leaders you might think that Amy Brennan, the Executive Director of the new Georgetown YMCA, needs training on her listening skills. However, the only kind of training she needs is an additional bank of fitness training machines. Given member demand she has already posted a notice that use of the mechanical trainers is limited to 30 minutes when others are waiting. Three weeks after opening the facility she already has more members than expected by anyone, naysayers and herself included.

The story of the Y in Georgetown was once a "why not in Georgetown" story. Only later did it become a "Y in Georgetown" story. It took five years for the transition to occur. Five years of talking, planning, listening, and doing. The photo that leads this post catches the meeting when Coastal Community Foundation Board Member Charles Rowland asked Amy Brennan to come to Walterboro. The photo shows the instant that the "Why not in Walterboro?" story took over from the "Y in Georgetown" story. It only took three weeks for this transition to occur. Soon it will be a "Why not in fill-in-the-blank" story and will be being told all around the State. Amy Brennan is being asked to take her listening and leadership skills on the road to help others create a Y of their own...and why not? If Amy Brennan and her Board can create a YMCA in Georgetown County, with all of the naysayers still doubting their success, she deserves an audience.
Let's just hope that Amy's audiences learn to listen to the voices that matter, like Amy did. If Amy can teach her particular style of listening we, and all our children, will be better for it.
Posted by George Stevens

Email ThisBlogThis!Share to TwitterShare to FacebookShare to Pinterest
Labels: Board, fundraising, Georgetown, Walterboro