Protector of the Ebbs and Flows 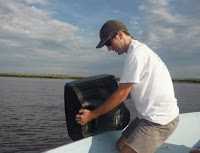 One of the newest weapons in the arsenal of water quality protection efforts is Charleston Waterkeeper, a one-man watchdog operation on the lookout for pollution in local rivers, streams, and tidal creeks.


Cyrus Buffum is literally serving as our eyes, ears and nose, out on local waters day and night, looking for pollution and other environmental degradation that’s often out-of-sight and out-of-mind. Last fall he secured a charter from The Waterkeeper Alliance, a network of 180 independent groups globally, and today he looks for polluters, reports to the appropriate authorities, and, if necessary, pursues legal action to stop or mitigate the fouling activity. Cyrus has been busy organizing beach cleanups, supporting local efforts to remove abandoned boats from creeks and rivers, building relationships with other water quality stewards, making regular patrols, and oh yeah, raising money. To see Cyrus’ daily activities, “follow” him at www.twitter.com/ChasWaterkeeper

Posted by Courtenay No comments: 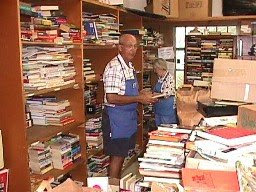 It all started out in a straight forward way. Corporate life at IBM. White shirt. Blue tie. Golfing during those rare and precious moments of free time during corporate meetings at exotic locations. Thoughts of golfing in retirement, but not deep thoughts, just thoughts. Then reality hit.

A corporate "right-sizing" created an opportunity for Buck Edwards to step away from the highly structured and protective environment of IBM to do what we all dream of doing: the thing that exactly suits us. Problem is, what suits us during the high stress, work-filled weeks of making a living may not be what suits us in retirement. We forget that we create that high stress for a reason. We create it because it suits us.
Mr. Buck describes the transition this way. "On Day One of retirement I came home from the golf course and my wife asked me how was my game. On the second day, when I came home, she asked me again. By the fourth day I realized that you do not ask someone about their game unless you want a full stroke by stroke description." Mr. Buck scowls at the retelling of this story. He needed more of a reason for his week. Meanwhile, his wife was playing tennis and meeting people, making new friends, volunteering at the Bargain Box, in short, networking just like she always used to be doing. It suits her. (She is also an Ex-IBM'er.)
Mr. Buck reluctantly volunteered to mentor a 4th grader. "Just an hour a week, really, I promise," his new-found tennis buddy told him. He got his monicker there. "Mr. Buck" is what the kids call him. He also got his mojo, his meaning, his motivation to become a recruiter of other volunteers and to volunteer elsewhere as well.
He nows "sells" volunteerism on Hilton Head.
He also serves ("really, just a day a week," his wife told him), as VP of Furniture at the Bargain Box. A volunteer position of course, but closer to his past life at IBM than his past dreams of retirement when he was at IBM.
Change? Sure. It is the nouns that have changed in Mr. Buck's story. The verbs are all the same.
Mr. Buck tells me that The Bargain Box distributed $400,000 to charities in the past year from the sales of furniture and everything else that passes through their doors. That's $12MM since 1965 when the thrift shop first opened. He could have said, but didn't, that corporate earnings are flat but market share is increasing.
Did I tell you that Mr. Buck was a salesman at IBM or did you guess that?
I can just hear him saying "Well, that's a nice piece of furniture you've picked out. Be a shame to not display it well in your home...how about a throw rug to go with it? Candlesticks? Do you have some accessories for that end table?"

Changing one's life, one noun at a time.
Posted by George Stevens No comments: 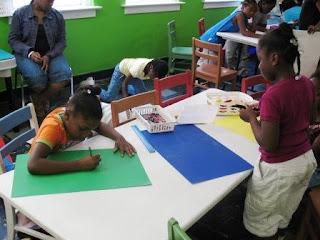 So I was a bit nervous. I had visited a Freedom School before but this was different. This time I had to read aloud to a roomful of kids. I was to read about Li Chi, a Chinese maiden who volunteered to be eaten by a dragon. Instead, she killed the dragon and saved the village. The irony of it crossed my mind as I stepped to the front of the classroom. She was out there killing dragons and I was trembling at the thought of reading a book to a group of kids.

Both Metanoia and Charleston Youth Development Center have Freedom Schools. They both encourage youngsters to overcome obstacles and to be strong in the face of adversity. They make "summer school" fun with chants, songs, and hard work that is rewarded with shout-outs of praise. The students at both Metanoia and Charleston Youth Development Center come from disadvantaged families. They face greater adversity than I ever do or did and probably about as much as Li Chi did in killing her dragon.
I read my piece. The students broke into a practiced ritual of singing a song that began with the words "That was awesome..." Those words were followed by other words fit together nicely but I was no longer able to listen. I failed to hear much after the "That was awesome..." part because the waves of thanks and adoration washed over me. It made me realize the power of praise and how infrequently many of these kids get any of it in their regular lives.

It also made me realize how fortunate I am, not because I get praise, but because I witnessed the raw power of praise and how it changes a kid's life.

Posted by George Stevens No comments:

If only it were true. If only there were a formula for sustainability that could be broken down into three additive components that equaled sustainability: leadership + adaptability + program capacity = sustainability. To read the consultant's report, recently making the rounds of the twitter-sphere from Philanthropy News Digest, it looks so easy. All you need is visionary leadership, a willingness to adjust to changing conditions, and staff resources (i.e., skills, knowledge, passion, etc.) and you too can create a sustainable organization. So what's got me, the eternal optimist, ranting?

Well, let's start with the source. TCC Group is a consulting firm that provides strategic planning and management consulting services to nonprofit organizations. The data they analyze comes from the 684 nonprofit organizations that have paid TCC Group for analytical services associated with a "Core Capacity Assessment Tool" or CCAT. These data are not a random sample of nonprofit organizations and most likely include larger nonprofits more often than small ones, rich ones more often than poor ones, ones with inquisitive leaders or leadership teams more than those who just want to achieve their mission without lots of management mumbo-jumbo. Without going into the gory details I've got serious questions about the quality of the statistical analysis.

But what really got me going is a statement buried in the footnotes:

All presentations of variables that predict sustainability are concluded based on two factors: 1) the original theory of organizational effectiveness and how TCC believes it relates to sustainability; and 2) regression analyses. True predictability will require further research and investigation.

Translation: We have a model we believe in and where the statistics support our approach we present them. Oh, and by the way, we can't really predict sustainability. What we see over and over again is that individual donors, whether right- or wrong-headed, can support individual nonprofits in perpetuity...in other words, sustainably. I wish that it were true that expert management was held in such high regard by all donors. I wish that nonprofit leaders were chosen for their management skills. I wish that TCC Group's training and coaching would guarantee sustainability, or that anything like a training course could create sustainability, but it simply ain't so.

Donors create sustainability. Some organizations and some causes are so central to our community that donors will give, forevermore, to support the organizations that fill those needs. Donors will give during those times when the organization is poorly led and will give when the leadership is strong. Donors who care about changing our community often give to multiple organizations that address a single issue because they just do not know which organization will do the best work. Donors give for a wide variety of reasons but generally to a narrow selection of organizations or causes. And while their giving can sometimes appear to be misdirected, their desire to address root causes cannot be denied. We have the endowment funds to prove it. They give, forevermore, to causes that matter...no matter who is leading the charge.


Posted by George Stevens No comments: